Archive for the 'Oh' Category

The End is Near 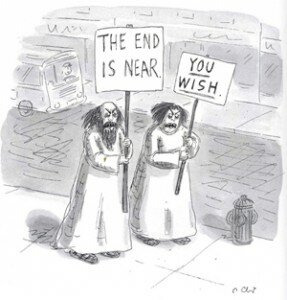 Sorry to interupt your previously scheduled after lunch nap, but I have an urgent announcement from Wo’C favorite wingnut (with an emphesis on the “nut”) Jen Shroder.

The Lord showed me something last week on the anniversary of 9/11. Something that would be condemned by both the right and the left if it gained any traction. But it’s what I saw.

“She’s the Sheriff: the Movie” with Paris Hilton in the starring role.

Years ago the Lord healed me after I asked if I could live long enough for my kids to grow up. My youngest had no more walked out the door for college when all five of my cars died at the same time as if on cue. One needs a brake master cylinder, one needed a new alternator but $500 later it’s still stalling unexplainably, one’s tranny is going and then totally died, one’s starter needed replacing, and finally, my faithful minivan that is ancient and over 226,000 miles, the one that would start up again if I prayed over it, the one that I used for footwashing, the one I was driving when the Lord warned me of disaster ahead and saved my sons and I, the one that honestly lost all symbols of “Dodge” when I put on three Christian fish symbols (they just dropped off, it was amazing)…that one died. Just stopped.

Kids, please try this at home: put three fish symbols on your Dodge minivan and see if the Dodge symbols will drop off. If they do, then we’ll have proof positive that Detroit is the gateway to Hell, and that Satan’s plan for your future involves GMAC and gas-guzzling, crappily-built vehicles.

It sat there for days until I finally called a tow truck. As he chained my beloved minivan up, a scorpion crawled out from underneath and headed straight for me. I have never seen or heard of scorpions in this area before. I was stunned and said out loud, “Wow, all my cars die and then a scorpion crawls out from under my minivan, what does this mean?”

What DOES this mean? Obviously, something more than the fact that Jen has broken-down, vermin-infested cars. (I’m betting for a combination Aesop’s fable/conspiracy to disable cars by the German rock band also responsible for “Rock You Like a Hurricane.”

My first reaction to the scorpion is Islam, but that’s not right. In Jeremiah’s day, God raised up Babylon. In our day…it’s name is Islam.

Um, no. In our day, Babylon’s name is … worldliness and unrighteousness. (Or, Jen, per a fellow “prophet”, it’s America.

America elected politicians that fight for partial birth abortion. We fund abortion on demand. We close our eyes to child sex slave rings and obsess over endangered snails. We cower rather than object to public schools teaching our children profane sex acts and praying to Allah. It seems the only use that our elected government has for our children is to either kill them, sex them or commit them to bow to foreign gods.

I know that’s the campaign platform I look for in a politician.

Who am I to write such things?

The voice of a lone nut, crying in the wilderness?

No one. But the last time God gave me a message like this, I posted it and it has remained in the first or second position on Google for years and to this day with just three secular words: “three” “days” “nights” It is the “Sign of Jonah,” the only sign that will be given an evil and adulterous generation.

The sign of Jonah Goldberg (which is like the Bat Sign, only featuring a beached whale instead of a bat), should ONLY be given to an evil and adulterous generation.

Google “three” “days” “nights” and see for yourself. That’s not something I could do.

Um, Google “Jen” “Shroder” and “pinkie” and see another miracle for yourself!

Anyway, Jen’s piece about the Sign of Jonah features the standard interpretation that Jonah’s three days in the belly of the whale foreshadowed Jesus’s three days in hell, etc, before he was resurrected. But Jen somehow interprets this to mean that she is a prophet, called to warn us that we will be destroyed by Muslims if we don’t stop teaching our children about Islam in the public schools.

And now a scorpion is telling Jen the same thing. And apparently we have only three days to repent before IT’S TOO LATE!

America, turn around. As a nation we have run out of time, but on your own…seek Him while you can. Don’t blame the Muslims, we brought this on ourselves. Seek Him and live.

Yes, in light of our upcoming doom, Jen’s report that the “Ground Zero Mosque” is part of some sinister Saudi conspiricy to conquer America pales in comparison. So, plan accordingly.

I tooke HeyDave’s advice and took a gander of Jen’s profile photo, taken back when she was a free-lovin’ hippie. And while there, I checked her past columns to see what the death sentence she was spared from might be. Turns out it was broken light bulb poisoning.

It’s true. I just found out this morning.

I broke a CFL light bulb a few months back and was just informed I’ve been contaminated, exposed, full of mercury poisoning which will give me Alzhiemers (something I can’t even spell off the cuff).

Am I the only one that’s broken a freaking light bulb? Since when has that carried a death sentence?

Silly Jen, you should have read the pamphlet. It was spelled out clearly in the Obama/Biden 2008 literature: “If elected, we plan to thin the population by encouraging people to use energy-saving light bulbs that will kill the clumsy. Extra points for each toddler we knock off!”

What other plans have they got for children that escaped the abortion mills? Will Christmas tree lights have to be…what a silly question, poisonous Christmas, this is atheist brilliance.

Yes, it is. Maybe a little TOO brilliant. I suspect that Bill O’Reilly was behind the whole thing.

And the story of Jen’s final hours continued in Death by spaghetti light bulbs, which I think could be made into a cool retro TV show, much like that old “Run for Your Life,” starring David Jansen.

This was my favorite line from the piece:

I would rather be rationed one light bulb a night than deform my kids!

I think this will be the “Better to light a single candle than curse the darkness” of the upcoming War Against the Light Bulbs.

Anyway, apparently the Lord healed Jen and all is well . . .for now. But the price of freedom is perpetual vigilance against glass. 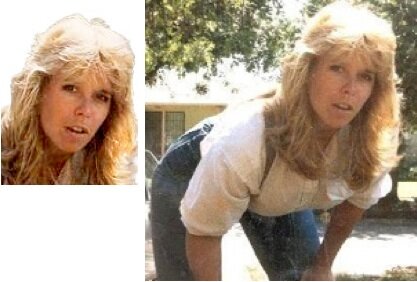 For those who are curious about Jen’s photo, but don’t want to get out of the boat, here it is.  On the left is the headshot she’s been using since at least 2003 (with the background Photoshopped out), and on the right is the uncropped version.  How old the original photo is, and why she hasn’t replaced it with an image in which she’s at least standing erect remains a mystery, but perhaps she doesn’t want to make it any easier for the Muslim arachnids to find her.

A Focus Group In The Woodpile

At the Corner, Jonah blinks in wide-eyed wonder like Alfalfa, and asks in a voice of pure childlike innocence whether all those Buckwheats weren’t tainting the He-Man Obama Haters Club:

This is purely a methodological question. If the reporting on blacks said they were torn between the candidates I wouldn’t be asking this question. But his focus group is allegedly a collection of “swing voters” from Virginia. And it appears there are a relatively large number of blacks in the focus group. I keep reading that blacks are supporting Obama somewhere between 95 and 99 percent. So, purely as a statistical matter, how do you explain having — by my very rough guestimate — 10% of Luntz’s swing voters being black? I’m just curious.

Just wondering.  Just puzzlin’ a wee bit.  Don’t mean anything by it.  I’m sure they’re all very nice people, taken on an individual basis, but the blacks, they do have a hive mind, so really those cable news folks might as well have given their response-o-meters to the Borg.

I Blame the Drugs… 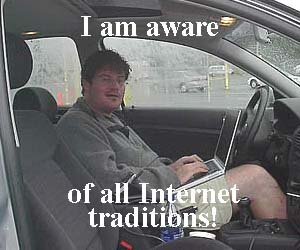 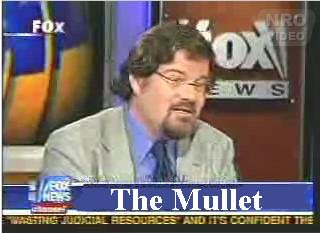 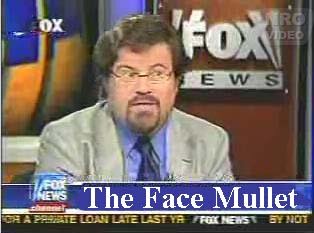 [inspiration via Sadly, No! comments and  Balloon Juice]

MUSCAT, Oman – Vice President Dick Cheney went fishing in the waters between Oman and Iran on Wednesday, borrowing the Sultan of Oman’s 60-foot royal yacht for the mission.

A Cheney spokeswoman said the vice president, his wife Lynne, and daughter, Liz, a former State Department official who is traveling with her father as a private citizen, headed out under sunny skies into the Gulf of Oman on “Kingfish I,” owned by Sultan Qaboos bin Said.

A little R&R on our dime. But why should that surprise anyone? This is what Dick Cheney thinks of two-thirds of the American public:

CHENEY: On the security front, I think there’s a general consensus that we’ve made major progress, that the surge has worked. That’s been a major success.

RADDATZ: Two-third of Americans say it’s not worth fighting.

RADDATZ So? You don’t care what the American people think?

CHENEY: No. I think you cannot be blown off course by the fluctuations in the public opinion polls.

Not even if you don’t own the boat. After all, if Cheney suddenly seized the helm of the Kingfish I, opened the throttle and — despite the protests of the crew and two-thirds of his family — crashed it into an offshore oil rig, touching off a massive explosion, I’m sure the Sultan’s first reaction upon hearing about the massive loss of life and the destruction of his property would be a swell of admiration for the Vice President’s steadfastness.