Sarah Palin Would Have Killed and Skinned Her Own Critters

I’ve been busy, but I can’t believe I missed the release of the new Clare Boothe Luce Policy Institute and Old Maids Club “Conservative Dames Who Enjoy Being Sex Objects” calendar. Here’s the info straight from the mouth of Zombie Clare herself (or one of the unpaid Institute flunkies).

We took some of your favorite leaders of today’s conservative movement on a journey back in time,

. . . and left them there to be eaten by a Tyrannosaurus Rex.  Unfortunately, the women went around smashing butterflies just to watch them die, thus changing history and causing people like Kellyann Conway to be considered to be a “leader of today’s conservative movement.”

and made them up into glamorous movie stars of classic Hollywood. Back when the big screen was a little more glamorous, women were a little more feminine, the men a little more charming—and the world a little less politically correct.

One of the women they took back in time to when women were a little more feminine and therefore liked killing small animals for their skins was Ann Coulter.  So, we have a lovely photo for the next Wo’C birthday celebration.  (I’m just hoping it’s not Jesus’s, because giving him THAT for his special day seems not only deeply wrong, but also blasphemous.)

Anyway, I imagine Sarah was too busy buying new “Joe Six-Pack” mink coats of her own to be part of this year’s calendar, but I look forward to seeing her appearance in it next year.

So, I thought that for today we could enjoy the photo of Amanda Carpenter, girl reporter.  Here’s her calendar bio:

Yes, she puts a conservative spin on wire service stories for Townhall.com, and also contributes to a group blog for Glamour mag.  You can see why she qualifies as a leader of today’s conservative movement (i.e., she hates Hillary Clinton).

She is wearing a black-and-red three-quarter length sheared mink jacket by Miller’s Furs.

And, as you’ll note from the photo (just look at those eyes and that pale, clammy skin), Amanda is either dead or her soul was sucked dry by Ann Coulter in the green room.  Our condolences to her family. 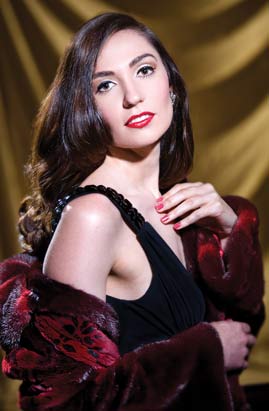 Yeah, there’s nothing like evoking a more glamorous, genteel era by being as patently offensive as you possibly can.

And really, what else screams “I’m feminine, dammit!” like a couple pounds of makeup and the pelts of a few wily minks you outsmarted?

Attach a few live ones to her. That’s a calendar I’ll buy.

You want something a little less politically correct?

Shouldn’t the black lady (whoever the hell she is) be in the kitchen baking a couple dozen pies for the rest of the cast? Maybe while Barack is in the garage elbow greasing another can’s worth of Simonize onto the hubcaps of the Rolls before going out to play cards and drink wine with the groundskeeper?

Doghouse:
Attach the live minks to Ann Coulter’s FACE and I’ll buy it.

And really, what else screams “I’m feminine, dammit!” like a couple pounds of makeup and the pelts of a few wily minks you outsmarted?

Correction: The pelts of a few wily minks your sugar daddy bought you in return for a little nookie.

$25 for a CALENDAR??? I’ll wait to get the complementary WWF or Sierra Club one. At least they’re pretty.

You know the most important thing when you’re doing ‘glamour’ shots? Thinking. About what doesn’t really matter, though you should try thinking about something that matches the emotion the photographer wants to display. The thought shows in the photo, adding life to the image.

Perhaps she should try it some time?

I’ll bet the Glamour Shots kiosk was super busy at the mall that day.

Correction: The pelts of a few wily minks your sugar daddy bought you in return for a little nookie.

Well, more like “in exchange for promotional consideration” in this case, but you don’t imagine I thought any of those intoxicating female specimens could really outsmart a polecat, do you?

Ah. “Produced & directed” by a committee, whhich went to the expense of hiring cosmetology students.

Produced and Directed By: Clare Boothe Luce Policy Institute
Hair and Makeup By: Paul Mitchell The School and David Rios

And as we couldn’t find a link to the pretties on the Luce page, here y’all go.

Doghouse: In polecattery, it’s more important to out-stink, rather than out-wit. And we’ll just assume that these ladies…

I saw the photo and thought this was a movie review of “Mannequin”.

Well…it’s true: Sarah’s got her own calendar. It’s got some lovely photos in it, must say. 1 used on Amazon. lol

Left by OhCrapIHaveACrushOnSarahPalin on December 16th, 2008

Yeah, having looked at the calendar, I’d say “intoxicatED female specimens”, Doghouse. Cheap shot, but not unfair. I haven’t seen that vacant a collection of looks since me and a bunch of other people got trapped in an elevator with a Scientologist.

And really, could someone explain the chick with the *green* furs? I thought the point of furs, for the cruelty-to-animals crowd, anyway, was elegance. Once you start dying the damned things, it’s no more elegant than a Waterford sculpture of a lawn flamingo. I mean, I’ve got no damned taste, but I know enough not to wear furs like they were Spandex.

Shit fire and save matches, Amanda’s got a big ol’ set of man-hands, doesn’t she?

I personally find the pinups in this calendar frightening enough to scare the cornchips outta Stephen King.

Once you start dying the damned things, it’s no more elegant than a Waterford sculpture of a lawn flamingo.

I think there’s still a furrier who advertises in the Indianapolis market, and I think I saw something dyed a color not found in nature (not just among furs, but the entire visual spectrum) a year or so ago, and the only thing I could figure was “fur for women who must have fur but are afraid to wear it in public.”

Among the many points to be made here is that beginning with an aesthetic falsehood leads very quickly to aesthetic atrocity. You might be able to “recreate” the atmosphere of a more elegant time (but think how many movies try and fail, with $100 M budgets), but you’re sure not going to do it with artistic direction by graduates of the Glamor Shots School of Beauty (in exchange for promotional consideration). Or you might try to evoke it, which you’re not very likely to do with models that can’t carry it off (what prevents these women from being “elegant”-with-a-capital-E every day?). They did neither, but they weren’t intending to; some permanently disgruntled sinecure at Luce with a bad case of terminal middle-age, or else some young no-nothing staffer, came up with the idea (”idea” may be too strong a word) of making a few bucks off what they perceive as a nation of gun-nut slaughter fiends with a hard-on for Sarah Palin. (Fairly typical of the right-wing elitist fantasy about the “real” America they claim to speak for; come to Indiana, ladies, and find me a gun nut whose wife wears mink.)

“Return to glamor” is just another example of how these people have the medicine show pitchman where their souls are supposed to be. Apart from the ironic raccoon coat of the 1920s, fur has always been the Tulip bulb craze of fashion, valued because it was expensive, and nothing more.

Don’t forget, the wearing of fur is a deliberate poke in teh eye of those sissy liberals. These days it is the only pleasure the wingnuts have. “I’m gonna wear fur and drive over the speed limit in my Hummer while smoking and listening to Rush! That’ll just drive the Liberals Crazy! HaHa-HoHo-Hee-Hee! They’re comming to Take Me Awaaay! But wait! All the mental hospitals have been shut down, so they had to let me go! Eat THAT Libs!”

I need to buy a new pair of glasses, because when I look at the photos I see one conniving, self-centered, deceitful, neo- fascist sanctimonious witch wearing different masks. They should have named the collection Cougars for War.

Marc, the black woman is Star Parker, one of the regular Townhall wingnuts. I’m judging from you not knowing who she is that you have been too smart to expose yourself to her racial self-loathing; unfortunately, I have not been nearly as wise

Yeah, she killed that critter with her *teeth.* And now she’s eying the lighting guy… (Also, appropriate last name, imho.)

I object on behalf of both pagans and panthers, etc.

Good news, my partner has a new job, so I won’t be forced to drape my cats over me and try for the liberal version of this calendar. More hours, less pay, longer commute, worse benefits, but lucky to have it. We’re happy, the kittens get to stay, we can turn the heat on a bit, and we may even get around to replacing our oven eventually. Hooray!

oooh and did you catch this one?

it reads: A regular on the Fox News Channel’s O’Reilly Factor, Mary Katharine Ham is the online editor of The Washington Examiner. Formerly the managing editor of Townhall.com, O’REILLY is wearing a green three-quarter length sheared mink coat with laser grooving from Miller’s Furs. OMG EVERYONE, OREILLY HAS GONE DRAG!!

Kathy, why would wingnuts think we’d be pissed if they listen to Rush? They can listen any washed-up, mediocure Canadian band they want-Rush, Loverboy, Men Without Hats…
I do not give a tiny rat’s posterior if they…
Oh. THAT Rush. Is he still on the air? How?

Bunch of Luce ladies. Nothing surprising there…

Those morons at ABC still have that O’Reilly typo up? It’s been a couple wks., at least.

From the Pretty in Mink slideshow:

A former welfare mother who turned her life around, Star Parker is a champion of personal responsibility.

I think the photographer must have been fucking with them because most of the shots are very unflattering. Coulter’s is the most flattering as much as I hate to say it.